I thought I’d get the bad out before the good with the two restaurant reviews I still have to write.  The good, Honey Cafe, will be up in the next couple of days; but the bad is such a hilarious comedy of errors that I had to share the story.

Katie and I met up with my family at the newly opened Bolingbrook location of Auld Dubliner, a small Irish-Pub-Themed restaurant chain.  I have to say that it’s probably the most authentic looking of the “not really Irish” Irish restaurants we’ve been to; although I still prefer Ballydoyle’s in Downer’s Grove.  The tables were all made from dark wood, the lighting was mostly natural, and there were enough clocks littered around the place to remind you that, yes, it IS always time for a Guinness.

And then the fun started.  We ordered two appetizers: Onion Bhajis — Spicy battered onions deep fried and served with tomato-chili sauce — and Curry Chips — A basket of deep-fried chips served with  homemade curry sauce.  There was only one problem.  My second bite of the onion bhajis came with a little extra iron for my diet, a coil of brushed steel wool deep fried along with the onions.

Now, I want to make it perfectly clear, the manager very quickly came over and profusely apologized offering up free desserts and taking the appetizer off the bill.  It was probably some of the nicest service I’ve had.  In fact, the service was probably one of the bright spots. Although, the waitress kept refilling everyone’s drink but mine, which can only lead me to believe my training in invisibility is finally paying off! 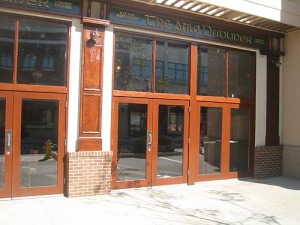 Unlike Katie, I actually enjoyed the two appetizers once they were free of all iron coils.  The onions, while not spicy, were flavorful.  The chili sauce added a nice little bite to the dish.  The curry fries didn’t meet our messy dish requirements, but at least they were normal-sized fries.  The fries were seasoned with salt and curry powder, placed around a bowl of a sweet curry sauce.  Katie wanted more spice to the dish, which I’m always up for, but after the disappointment of the English curry fries, I was happy to have something closer to normal.

The main courses were a vegetarian boxty (sans broccoli, because it is evil and disgusting) and curried chicken (because Katie didn’t know how dissapointed she be in the curry when she ordered).  A boxty, for those who, like me, have never had one before is a largish potato pancake filled with various meats and vegetables and served with a sauce that compliments it.  In my case, the sauce was a white wine and lemon sauce, WAY heavy on the lemon.  With each bite, I could feel my gag reflex kicking in just a little bit more until I finally had to put my fork down or risk adding a little something extra to my meal.  And no one needs to see that on their birthday.  Katie’s chicken was cooked fine, her only complaint being the complete lack of spice in the curry.

At this point, let’s recap.  We’re batting 0 for 2 as far as Katie’s concerned, and a decent 1 for 2 as far as Mike goes.  I also believe that’s the first sports analogy that’s ever popped up on this blog.  It will probably also be the last.

Dessert.  Creme Brulee and a Peanut Butter Nutella brownie.  The Creme Brulee brought no complaints.  Katie’s a fan of the brulee.  I prefer a pot de creme, but to each their own.  My brownie, made up of two of my very favorite ingredients, was SO close to turning the tides of what was turning out to be a lackluster meal…

But, the bottom of it was burnt.  And yes, I knew for a fact it was burnt, because it had that aftertaste that only a burnt chocolate brownie can have.  Oh, I was disappointed.  Every other aspect of it was exactly what I was looking for in that dessert.  It was warm.  It had slowly melting ice cream oozing.  And again, peanut butter and nutella!  This was made for me!  So close.  But it was the perfect bookend to a meal that seemed out to provide Mike a great story to tell his friends on Monday.

And that’s exactly what I’m doing.  I’m nothing if not occasionally predictable.

What made it even funnier was the teasing I was getting from the table.  “I can’t wait to see what Mike’s review of this place is going to be!” my family laughed.  Yes, thanks to our recent publicity I’m now notorious within my own family.

The bottom line?  We won’t be returning to Auld Dubliner.  While the service was good, and the appetizers/bar bites were tasty, there were just one too many strikes against the meal to warrant a return visit. But, maybe it was just the food we decided on, because my family seemed to enjoy themselves just fine, which was the most important part since it was a celebration of their birthday, not mine.