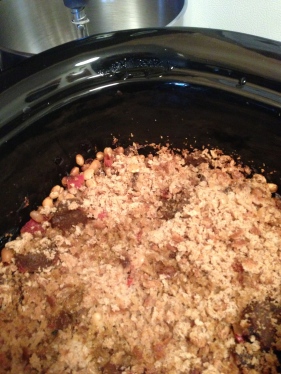 I know the very idea of a vegetarian French cassoulet is an idea of contradictions. French love a few things: butter, pastry, slapstick comedy, pencil-thin mustaches and meat. Also, from what I told they also love hating on Americans, but I’ve never been there so I can’t say firsthand. Part of me feels that the stereotype has been given the mythic proportions treatment, but the other part of me feels like, “Well can’t really blame them. We’re pretty gross.”

But this IS a vegetarian French cassoulet. Meat substitutions and vegetable stock replace the typical meaty ingredients. Just go generous with the salt. I was a bit conservative and I think it needs more than “to taste.”

I’m also skipping the bread crumbs because it gave the texture a more mealy grit to it and unless you’re talking about grits, it’s never a good thing for food to be described as mealy or gritty.

Preheat the oven to 350 degrees if using the oven.

If using a casserole, bake, uncovered for 90 minutes. Or cook in a crockpot on low for 6-7 hours.